All the Silk Road Cities

All the Silk Road Cities

Highlights of this classical tour to all the Uzbek Silk Road cities:
– stay in an attractive guest house in the ancient and walled ancient city of Khiva
– excursions in Khiva, Bukhara and Samarkand to all classical highlights
– day trip to Shahrisabz, the birthplace of Timur

A tour of Uzbekistan with a visit to the “Soviet” capital Tashkent and the legendary Silk Road cities of Khiva, Bukhara, Samarkand plus Shahrisabz. In nine days, including the flight days, you visit the five tourist highlights of the country.

Our customers have appreciated and written about this program (and other programs) under Testimonials on this website.

Arrival in Tashkent and start of your tour including all the Uzbek Silk Road cities!

Upon arrival in Tashkent you will be met by a driver with your name card and then taken to your hotel in the city. Most international flights arrive in the night or early morning.

Scheduled to visit are: Khastimam Complex: Barak khan Madrassah, Kaffal ash-Shashi Mausoleum, Library with the world-known Uthman Qur”an. Additionally the Friday Mosque; Kukeldash Madrasah and the Chorsu bazaar.
In the new part of the city you will be talen to Independence square, Navoi theater square and more.

Your guide can advise you about restaurants, just ask him or her! Exchanging money is no problem anymore since 2018, including Euro & USD cash, debit cards and credit cards. 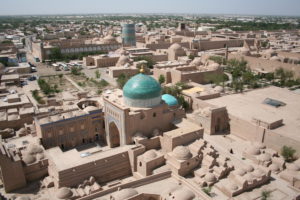 You get up early, have breakfast and will be taken to Tashkent airport for the early flight to Urgench in north-western Uzbekistan. Upon arrival you will be met by a driver and taken to nearby Khiva, a half-hour drive away.

After you have checked in at yourr hotel you will have all day to enjoy the old city of Khiva, a kind of open-air museum. Because the distances between the sights are small, it is easy to walk.

These days Khiva is like an open air museum. Today you have a guided excursion, on foot and visit the oldest part of the city. Including the Kunya-Ark fortress, Pakhlavan Mahmoud Mausoleum, Mazary Sharif Madrassah, Islam Khodja Madrassah and Minaret, and much more! 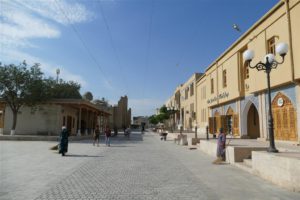 A long drive through the Kyzyl Kum desert takes you from Khiva to Bukhara. Along the way you make a photo stop at the Amu Darya, the lifeblood of the area, and have lunch in an oasis. In this part of Uzbekistan, especially near Khiva, the effects of the drying up of the Aral Sea cannot be ignored. The landscape is covered with a thin layer of salt blown away from the bottom of the lake.

In Bukhara you will be accommodated in a guesthouse in the old town and have free time to het acquainted with it.

While Khiva is basically a (marvellous) open air museum, the old city of Bukhara is bustling and will give you a flavour of what life during the Silk Road times must have looked like.

In the morning transfer by car or minibus to Samarkand; you will notice less desert than the previous route, and more agriculture. Uzbekistan produces an enormous amount of cotton and if you are traveling in the right season, you can work witness people labouring in the fields, perhaps lend them a hand, as well as visiting a cotton factory.

You will also visit en route the Summer Palace of the last Emir and an old Karavansarai, from Rabat Malik. 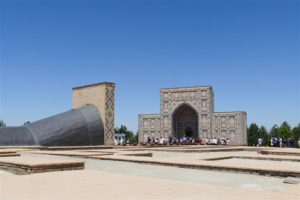 A day in Samarkand, with lots of blue after the brown of Bukhara. Samarkand is not only a legendary Silk Road city, is also a city with more Soviet influences, and much bigger than Bukhara. Also, unlike Bukhara’s relatively small old town, in Samarkand the distances between the great buildings are significant.

During a visit in May 2018 we found out ourselves how much the buildings in Samarkand are being renovated beautifully and facilities are improving. Also the number of tourists is increasing quickly, better visit sooner than later!

You will visit today, if you keep up with it:
– Guri-Emir mausoleum where legendary Amir Temur and his family are buried.
– Registan Square-famous complex of three Madrasahs and the golden dome mosque.
– Bibi Khanum Mosque – the largest mosque ever building over in Central Asia, as a gift from Tamerlame’s wife to her husband!
– Siyab local bazaar – a unique chance to experience present life in Samarkand
– Shahi – Zinda necropolis, a sacred place and cemetery with the graves of Temured’s dynasty and the grave of a cousin of the Prophet Muhammad.
– The Observatory of Ulugbek – an incredible (really!) structure from the 15th century to study astronomy.
In the early evening transfer by a modern and fast train (3 hours) to the capital Tashkent. Transfer to a hotel and accommodation.

A one-day trip to Shahrisabz, birthplace of Timur and located 85 kms away from Samarkand. Visit to his palace Ak Sarai, the Kok Gumbaz mosque, the mausoleum of Jehangir (his grandson) and the mausoleum of Timur himself.
Shahrisabz is less visited than Bukhara and Samarkand but also higly relevant fur Uzbeks. As a result the town has seen much funding and restorations in recent years.

Return trip to Samarkand to the train station for the fast train from 17 PM to Tashkent, arrival 19 PM. Transfer to your hotel. 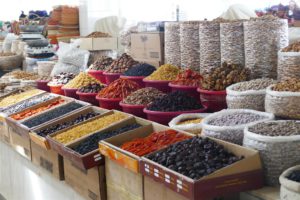 In the night or early morning, when most international flights depart, transfer to Tashkent Airport for your flight back home.

The costs of this program including all the Uzbek Silk Road cities are €940 per person for four people and €1,040 per person at two people.
It is possible to book this program as an budget option, excluding the guided excursions & entrance fees.

Included in the full offer are:
– all overnight stays in 3 * hotels and guest houses,  i.e. stay in double rooms incl. breakfast (upgrading to 4-5 * for an additional charge is possible)
– all transfers by car / minibus, incl. airport-hotel and hotel-airport
– tickets for domestic flights
– services from a driver & English-speaking guide during the excursions
– entrance tickets for museums and monuments according to the program
– unlimited mineral water on the way
Single supplement is € 100.

Not included are international flight tickets, lunches and dinners and all other services not mentioned. Finally, we withhold € 15 per booking for the Dutch GGTO Guarantee Fund. 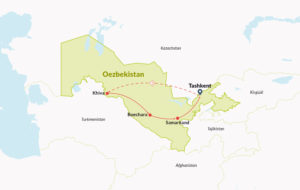