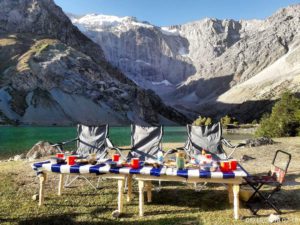 From 2022 a visa is not necessary anymore for a visit to Tajikistan for people from many countries!

You can read more about travelling in Tajikistan and in Central Asia here. Including much practical advise. 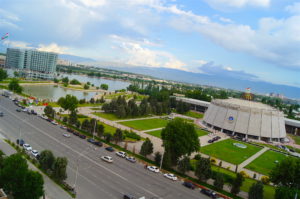 Upon arrival at Dushanbe Airport a driver will bring you to your hotel. And after some rest your tour program with many highlights of Tajikistan will start.

Just a short distance drive from Dushanbe, on a wide plain surrounded by mountains, lies the Hissar Historical and Cultural Reserve. Here we will explore the fascinating remains of an 18th and 19th century archaeological complex. It consists of a fortress, madras, and an ethnographic museum.

Return to Dushanbe to visit the Museum of National Antiquities. It exhibits artefacts primarily from Tajikistan’s pre-Islamic civilizations. The Greek, Bactrian, Buddhist, Hindu, and Zoroastrian periods. There is statue of Alexander the Great and wall paintings from ancient Penjikent. The most notable piece in the museum is an enormous, fifteen-hundred-year-old reclining Buddha!

Drive to Iskandarkul Lake (125 km) along the Varzob Gorge, and across Anzob Pass (3,373 m). Iskanderkul Lake is named after Alexander the Great. It is one of the most beautiful mountain lakes in Central Asia, surrounded by the peaks of Chimtarga, Hazormech, Sarima, and Gazni.

Alexander’s armies passed this way on their trek in the area. There will be time for a short walk to see a 30m-high waterfall. Accommodation in a local Guest House, all meals included. 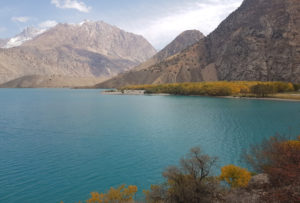 Departure from Iskandar Kul to Penjakent (120 km). Penjakent was rediscovered in the mid twentieth century and is still an active archaeological site. Visit the excavation site of the ancient Sogdian city from the 5th to 7th centuries.

Sogdians were important traders on the Silk Road trade routes and are thought to have been Iranian in origin. Penjakent is often referred to as the “Pompeii of Central Asia.”

Next you will visit the Penjakent Museum. And continue to the ancient settlement of Sarazm, which is said to have existed 3400- 2000 B.C. Numerous homes, religious buildings, and palaces have been excavated in Sarazm. Many articles made of copper, bronze, lead, silver, and gold have been found in the site. As well as weaponry and ornaments of the 4th to 2nd millennium B.C., 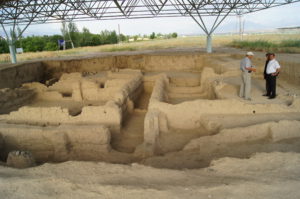 Not far from Panjakent (65km) are the Marguzor Lakes or the “Seven Beauties” (Nezhigon, Soya, Gushor, Nofin, Khurdak, Marguzor and Hazorchashma). They are situated in the Fann Mountains in the southwest branches of the Zarafshon Range.

The difference between the upper and lower lakes is 692m. Some of the lakes are a green grey and translucent, and the setting is quite dramatic. All the lakes except for Hazorchashma were formed by the creation of dams.

Return to Penjikent and accommodation in a hotel, all meals included.

Departure from Penjikent for Aini (180km) located in northwestern part of the country. We will continue to the museum city of Istarafshan, across the Shahriston Pass (3370 m).

Istarafshan is one of the most ancient trading centers of Central Asia with some of the oldest intact Islamic buildings in Tajikistan. There are many mosques, traditional streets, and several significant madrassa complexes. You will visit the blue domed Kok-Gumbaz Mosque and the mausoleum of Bobo Tago, a local aristocrat. In addition you will be shown the Chor-Gumbaz, and the complexes of Sari Mazor and Hazrati Shoh.

We drive north to Khujand for overnight in a hotel. All meals included.

Khujand, located in the north, is Tajikistan’s second largest city and one of its most ancient, founded about 2,300 years ago.

During the time of Alexander the Great (approx. 329 B.C.), Khujand became known as the furthest settlement of his conquest. Commanding the entrance to the Fergana Valley, Khujand became very prosperous and its riches spawned palaces, great mosques, and a citadel. Which survived until the Mongol destruction in the early 13th century.

According to Greek historians, Alexander founded a fortress on the River Tanais or Yaksart. This is the present day Syr Darya River,  which formed a natural border of his empire. Visit to the fortress via the Syr Darya River and the Khujand ethnographic museum.

In the afternoon visit the Panjshanbe Bazaar and Sheikh Musliddin Madrassa dedicated to a 12th century poet. Accommodation in a hotel, all meals included. 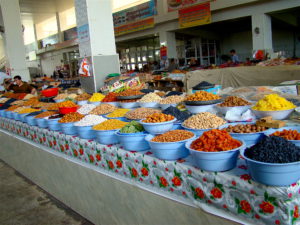 Return to Dushanbe. We will go through the Anzob Pass and arrive in Dushanbe before Lunch. After lunch visiting some souvenirs shops and Markets. Also the perfect place to get some dry sweet fruits!

Accommodation in a Dushanbe hotel, all meals included.

Day 9, transfer to the airport

Included in the offer are:
– all accommodations based on stay in double rooms incl. breakfast, in homestays and in hotels according to program
– all transfers in Tajikistan by car/minibus
– services from an English-speaking guide during the entire trip
– entrance tickets for sights and nature parks according to the program
– all lunches & dinners (full board)

International flights, and all other services not mentioned are not included. Finally, we withhold € 15 per booking for the Dutch GGTO Guarantee Fund.